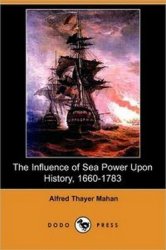 Alfred Thayer Mahan (1840-1914) was a United States Navy officer, geostrategist, and educator. His ideas on the importance of sea power influenced navies around the world, and helped prompt naval buildups before World War I. Despite his success in the Navy, his skills in actual command of a ship were not exemplary, and a number of vessels under his command were involved in collisions. On the other hand, the books he wrote ashore made him arguably the most influential naval historian. In 1885, he was appointed lecturer in naval history and tactics and the Naval War College. Before entering on his duties, Mahan was pointed to write his future studies and lectures on the influence of sea power. He organized his lectures into his most influential books, The Influence of Sea Power upon History, 1660-1783 (1890). To a modern reader his emphasis on sea-borne commerce may seem commonplace, but the notion was much more radical in Mahan's time. His other works include: The Interest of America in Sea Power, Present and Future (1897) and Types of Naval Officers (1902).