Modernization of Russia Under Peter I and Catherine II 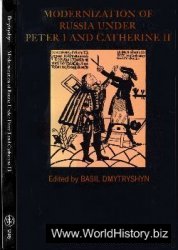 
The efforts of Peter I and Catherine II of Russia to modernize their country and transform it into a major European power are here examined by the two monarchs, by contemporary observers (Russian and non-Russian), and by pre-Soviet and Soviet historians. Several selections have never appeared in English before. All are candid, brief, readable assessments placed in a proper historical perspective by Professor Dmytryshyn's introductory statements. Basil Dmytryshyn was a professor at Portland State University, and this book is part of the publisher's Major Issues in History Series.