Early Modern Supernatural: The Dark Side of European Culture, 1400-1700 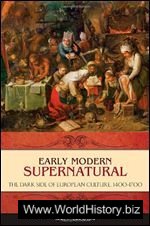 The dark side of early modern European culture could be deemed equal in historical significance to Christianity based on the hundreds of books that were printed about the topic between 1400 and 1700. Famous writers and artists like William Shakespeare and Albrecht Durer depicted the dark side in their work, and some of the first printed books in Europe were about witches. The pervasive representation of these monsters and apparitions in period literature, folklore, and art clearly reflects their power to inspire fear and superstition, but also demonstrates how integral they were to early modern European culture.