Barksdale's Charge: The True High Tide of the Confederacy at Gettysburg, July 2, 1863 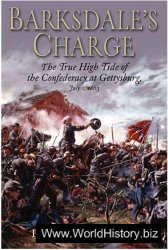 ACCORDING TO CONVENTIONAL wisdom, “Pickett’s Charge” has been long seen as the climax of Gettysburg, the largest and most important battle fought on American soil. But contrary to traditional assumptions, the failure of “Pickett’s Charge,” despite all its tragic majesty and heroic grandeur, was not the decisive event that condemned the Army of Northern Virginia and the Confederacy to an early death. In truth, Gettysburg was decided not on the famous third day of the battle, but on the previous afternoon. Indeed, Thursday, July 2, 1863 was the most important day in the Confederacy’s short lifetime and the most decisive of the three days at Gettysburg. And the defining moment of that Second Day was the repulse of the most successful Confederate attack, which came closer to toppling the Army of the Potomac than any other Rebel offensive effort of the war. It was the charge of General William Barksdale and his 1,600-man Mississippi Brigade on the afternoon of July 2, which one Union observer described as “the grandest charge that was ever made by mortal man.”