Lightning Over Yemen: A History of the Ottoman Campaign in Yemen, 1569-71 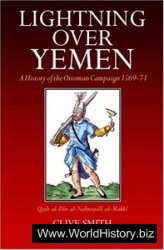 Author: Clive Smith
Lightning Over Yemen: A History of the Ottoman Campaign in Yemen, 1569-71
I. B. Tauris
ISBN: 1860648363
2002
Format: PDF
Size: 5,1 МБ
Language: English
Pages: 256
Yemen’s inhospitable mountain ranges and fiercely independent people have kept all but the most determined invader at bay; and even the Ottomans, when they entered the region in the 16th century, were hard put to achieve more than a tenuous occupation of its highlands. Their military campaign was chronicled by Qutb al-Din al-Nahrawali, a scholar charged by an Ottoman general to document his army’s progress. Lightning Over Yemen makes an invaluable 16th century Ottoman source document available in English for the first time. Al-Nahrawali’s work vividly brings to life a vital period in the history of this far-flung province of the Ottoman empire, which Clive Smith’s exemplary translation fully conveys.