A War Like No Other: How the Athenians and Spartans Fought the Peloponnesian War 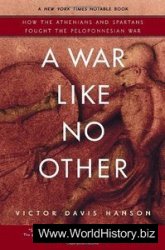 Author: Victor Davis Hanson
A War Like No Other: How the Athenians and Spartans Fought the Peloponnesian War
Random Youse
2006
ISBN: 0812969707
Format: EPUB
Size: 3,4 МБ
Language: English
Pages: 416
One of our most provocative military historians, Victor Davis Hanson has given us painstakingly researched and pathbreaking accounts of wars ranging from classical antiquity to the twenty-first century. Now he juxtaposes an ancient conflict with our most urgent modern concerns to create his most engrossing work to date, A War Like No Other.
Over the course of a generation, the Hellenic city-states of Athens and Sparta fought a bloody conflict that resulted in the collapse of Athens and the end of its golden age. Thucydides wrote the standard history of the Peloponnesian War, which has given readers throughout the ages a vivid and authoritative narrative. But Hanson offers readers something new: a complete chronological account that reflects the political background of the time, the strategic thinking of the combatants, the misery of battle in multifaceted theaters, and important insight into how these events echo in the present.