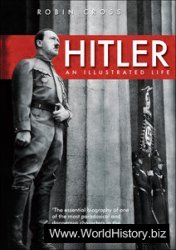 Author: Robin Cross
Hitler: An Illustrated Life
Quercus
2009
ISBN: 1848660200
Format: EPUB
Size: 7,1 МБ
Language: English
Pages: 224
As Chancellor of Germany between 1933 and 1945, Adolf Hitler exercised unrestricted power over his country's social, political, and economic life. From Hitler’s belligerent re-armament programme to his imposition of anti-Semitic legislation and territorially aggressive policies, respected historian Robin Cross maps out the life of one of the most evil men ever to have lived. This succinct and powerful account, illustrated with rare and chillingly evocative photographs, is the essential companion for anyone with a fascination for the twentieth century, the Second World War or the age of dictators.