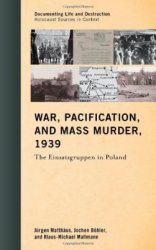 This invaluable work traces the role of the Einsatzgruppen of the Security Police and SD, the core group of Himmler’s murder units involved in the “Final Solution of the Jewish Question,” during and immediately after the German campaign in Poland in 1939. In addition to relevant Einsatzgruppen reports, the book includes key documents from other sources, especially eyewitness accounts from victims or onlookers. Such accounts provide an alternative, often much more realistic, perspective on the nature and consequences of the actions previously known only through documentation generated by the perpetrators. With carefully selected primary sources contextualized by the authors’ clear narrative, this work fills an important gap in our understanding of a crucial period in the evolution of policies directed against Jews, Poles, and others deemed dangerous or inferior by the Third Reich. Supplemented by maps and photographs, this book will be an essential reference and research tool.