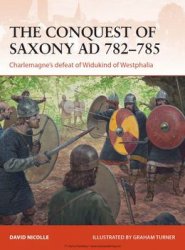 Charlemagne's conquest of the Saxons was the hardest fought and most protracted of his wars; it involved 18 campaigns spread across 33 years, a great deal of lower-level fighting and the harshest final peace settlement that Charlemagne ever imposed upon a defeated foe. Rapidly taking on the character of a religious conquest from its outset, it also became the most important of all Charlemagne's wars for the future direction and character of European history and began the long process of uniting the German-speaking peoples.