Oradour: The Massacre and Aftermat 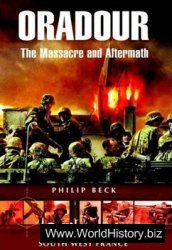 The destruction of the French village of Oradour and the massacre of its population in June 1944 by the SS Das Reich Division ranks as one of the most notorious atrocities of the Second World War. The scars that were left will never fully heal and there are those that would argue that they should remain as a lesson to future generations. The ruins of the village have been preserved as a memorial to the victims and a new museum has recently been opened by President Chirac. Fully illustrated in true Battleground style, this superb account reveals the full horror of this outrage.