The Byzantine Monuments and Topography of the Pontos. Vol.I-II 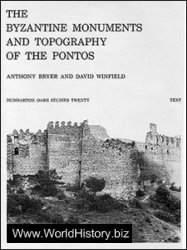 Author: R. Anderson, A. Bryer, D. Winfield, J. Winfield
The Byzantine Monuments and Topography of the Pontos
Dumbarton Oaks Publications Office
1985
Format: PDF
Size: 34.67 mb
Language: English
The Pontos and its empire of Trebizond (1204-1461) embraced the distinctive Black Sea coastlands, mountains, and pastures of northeastern Anatolia. The importanceof this unusual study is twofold. First, it places the material remains of the medieval peoples of the Pontos in their historical and environmental setting through a sequence of local histories. Second, it is a field record-usually the first and all too often the last-of over three hundred sites and monuments examined by the authors since 1957. They include walled cities, painted churches, cave monasteries, and perilous castles, all of which are covered in extensive photographic documentation with additional plans, maps, drawings, bibliographies, and indices.