Covered with Glory: The 26th North Carolina Infantry at the Battle of Gettysburg 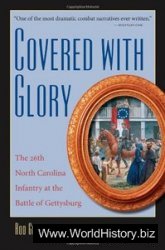 Author: Rod Gragg
Covered with Glory The 26th North Carolina Infantry at the Battle of Gettysburg
The University of North Carolina Press
ISBN: 0807871400
2010
Format: PDF
Size: 6,1 МБ
Language: English
Pages: 336
On July 1, 1863, the 26th North Carolina Infantry marched toward Gettysburg with a strength of 843 officers and troops. Two days later, the regiment could muster only 156 soldiersAa staggering loss of 81.5%, perhaps the highest casualty rate of any Civil War regiment, North or South. Gettysburg is one of the most written-about battles in history, but Gragg (Confederate Goliath, etc.) has mined a host of primary sources for this engrossing study and paints a detailed, vivid picture of the destruction of one of Robert E. Lee's largest units. Following a brief history of the 26th, Gragg follows the Tarheels north from Fredericksburg into Pennsylvania, then moves with the regiment to Herr's Ridge west of Gettysburg. From this vantage point, 21-year-old Colonel Henry K. Burgwyn Jr. led his superbly trained unit into the teeth of enemy fire from two Union Iron Brigade regiments. Although the 26th forced the Yankees back, Burgwyn was killed and the regiment was decimated as bearer after bearer of the unit's flag went down like chaff. After resting on July 2, the regiment took part in Pickett's Charge. Gragg's prose is at its best as he describes the time it took for the gray-clad battle line to cross the mile from Seminary Ridge to the Federal line on Cemetery Ridge, suffering casualties all the while. This exemplary book puts a human face on the 26th North Carolina's tragic loss at Gettysburg and is one of the most original titles on the battle to appear in the past few years.