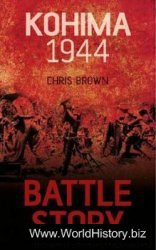 Kohima was the turning point in the Japanese invasion of India, witnessing the end of their attempt to overthrow the British Raj. It was a bitter battle fought in three stages, spanning three months, and ending with the siege of Imphal. Losses on both sides were heavy, with the Japanese suffering their greatest land defeat thus far in the war. Against the odds and an enemy who nearly refused to give in, the British Army resisted the Japanese and their victory paved the way for the reconquest of Burma. This book explores the historical context of this critical point in the war in Asia, the personalities of the opposing armies, and offers a blow-by-blow account of the battle.