From Makin To Bougainville Marine Raiders In The Pacific War 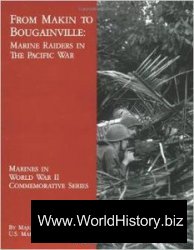 Author: Jon T. Hoffman
From Makin To Bougainville Marine Raiders In The Pacific War
CreateSpace Independent Publishing Platform
ISBN: 1494464357
2013
Format: PDF
Size: 7,4 МБ
Language: English
Pages: 44
In February 1942, Lieutenant General Thomas Holcomb, the Commandant of the Marine Corps, ordered the creation of a new unit designated the 1st Marine Raider Battalion. This elite force, and its three sister battalions, went on to gain considerable fame for fighting prowess in World War II. There is more to the story of these units, however, than a simple tale of combat heroics. The inception, growth, and sudden end of the raiders reveals a great deal about the development and conduct of amphibious operations during the war, and about the challenges the Corps faced in expanding from 19,000 men to nearly a half million. The raiders also attracted more than their share of strong leaders. The resulting combination of courage, doctrine, organization, and personalities makes this one of the most interesting chapters in Marine Corps history. This author examines the history of the Marine Raiders in the Pacific War.