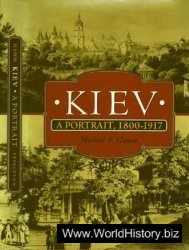 Kiev: A Portrait, 1800-1917
Author: Michael F. Hamm
Princeton University Press
ISBN: 069103253X
1993
Pages: 304
Format: PDF
Size: 107.25МБ
Language: English
In an "urban biography," Michael Hamm tells the story of one of Europe's most diverse cities and its distinctive mix of Ukrainian, Polish, Russian, and Jewish inhabitants. A splendid urban center in medieval times, Kiev became a major metropolis in late Imperial Russia, and is now the capital of independent Ukraine. After a concise account of Kiev's early history, Hamm focuses on the city's dramatic growth in the nineteenth and early twentieth centuries. The first historian to analyze how each of Kiev's ethnic groups contributed to the vitality of the city's culture, he also examines the violent conflicts that developed among them. He shows why Kiev came to be known for its "abundance of revolutionaries" and its anti-Semitic violence. This carefully detailed account reveals another side of the city's history. It helps to put present events in context, showing that at least one of the 'new' nationalisms in the former Soviet Union has old and very deep roots.