The Secret of Stalingrad 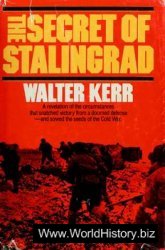 If World War II had a turning point, it came during the winter of 1942-1943 at Stalingrad when Hitler's Wehrmacht was decisively defeated by Stalin's Red Army and denied access to Soviet oil. Now Walter Kerr, a wartime correspondent in Moscow, contends that the battle also had long-lasting political implications. Stalin won, he claims, with the use of reserve formations whose existence he had concealed, calculating that the more critical the Western Allies thought his situation, the more likely they would relieve him with a European second front. In Kerr's revisionist thesis, Stalingrad was central to the mistrust and misunderstanding surrounding the twice-postponed second front, itself a key source of mutual suspicions leading to the Cold War. Kerr presents his case skillfully, weaving together the military and political aspects of the battle. He conveys the terrible drama of Stalingrad; whole units simply disappeared, chewed apart in the savage close-quarters street fighting. On both sides, ""the wounded thought mainly of getting away before the bayonets came because, as every infantryman knows, that is what bayonets are for--to kill the wounded."" Amazingly, Roosevelt and Churchill had no conception of the importance or scale of the Stalingrad battle since Stalin blocked the exchange of military information. Kerr deserves credit for clarifying the role of Stalin's reserve forces and recognizing their sacrifice. However, he never convincingly demonstrates why Stalingrad and the second front--as opposed, say, to differences over Poland and the Balkans--should be regarded as the origins of the Cold War. Though Kerr's thesis is likely to remain controversial, it adds interest to an astute mixture of military and political history.