The Lion's Gate: On the Front Lines of the Six Day War 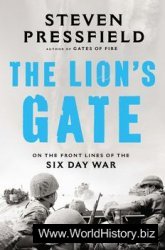 The nineteen-year-old state of Israel is surrounded by enemies who want nothing less than her utter extinction. The Soviet-equipped Egyptian Army has massed a thousand tanks on the nation’s southern border. Syrian heavy guns are shelling her from the north. To the east, Jordan and Iraq are moving mechanized brigades and fighter squadrons into position to attack. Egypt’s President Nasser has declared that the Arab force’s objective is “the destruction of Israel.” The rest of the world turns a blind eye to the new nation’s desperate peril.