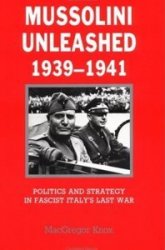 Author: MacGregor Knox
Mussolini Unleashed, 1939-1941: Politics and Strategy in Fascist Italy's Last War
Cambridge University Press
1986
ISBN: 0521338352
Format: PDF
Size: 8,4 МБ
Language: English
Pages: 400
This book explores the motives, preparation, objectives, contact and consequences of Italy's war of 1940, which ended the country's role as a great power and reduced it to the status of first among Germany's satellites. What Professor Knox demonstrates more clearly than any previous biographer or historian is the limits of Mussolini's power. In particular, thanks to exhaustive research in the relevant archives, he has been able to throw important new light on Mussolini's relations with his military advisers and commanders. His scholarship is first-class, and for once a publisher's blurb does not exaggerate in claiming that his book is 'superbly written'.