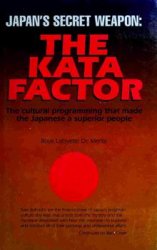 Kata [kah-tah], which translates as “form, process, way of doing things,” is the Rosetta stone of Japan’s traditional culture – the key that unlocked both the mystery and the mystique associated with how the Japanese did business and conducted their personal and professional affairs. Expressed another way, kata were the cultural molds that created and controlled the traditional behavior of the Japanese and were the source of both their strengths and weaknesses. Still today all dealings in Japan are influenced by the kata that continue to influence the mindset and behavior of the Japanese, yet most foreigners are not aware that they exist. Knowledge of the kata strips away the cultural cloak hiding the Japanese from the outside world and reveals the essence of the famous Japanese Way. For foreigners to deal effectively with the Japanese – in both personal and business matters – they must know when and how to induce them to break the kata molds and behave in a non-Japanese way. Younger generations of Westernized Japanese break the molds until they go to work, then they must conform to the kata that remain in whatever company they join.