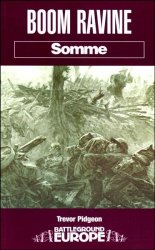 Boom Ravine was one of the most spectacular features on the Somme battlefield. The Germans took full advantage of the ravine's defensive possibilities, and inflicted heavy casualties on successive waves of British attackers. There has been a lack of coverage of the Somme front for the period between the British offensive of 1916 and the German attacks of 1918. Boom Ravine fills this gap, with particular emphasis on British actions in February, 1917. The losses incurred were especially ironic, for the German were already beginning a secret withdrawal to prepared positions twenty miles to the rear. In a few days, the British could have token possession of Boom Ravine without cost.