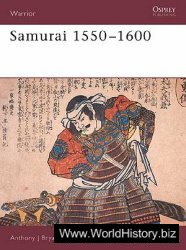 Author: Anthony J. Bryant
Osprey - Warrior 7 - Samurai 1550-1600
Osprey Publishing
ISBN: 1855323451
1994
Format: PDF
Size: 9 МБ
Language: English
Pages: 63
This title details the culture, weapons, armour and training of the elite samurai warrior class in the fascinating Age of Battles period (1550-1600). This was a period of vital importance not only because of the political effects of the chaos but also due to the changes in warfare that occurred. In 1542 the Portuguese introduced the matchlock musket into Japanese warfare, and this book traces the effect that this important innovation had on the samurai. Life outside the field of battle is also examined, making this an unmissable book for those interested in this brave warrior caste.