Breakdown. A history of recovery vehicles in the british army 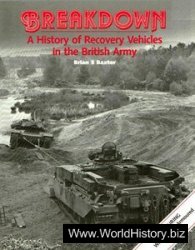 Author: Brian S Baxter
Breakdown. A history of recovery vehicles in the british army
Stationery Office Books
1990
ISBN: 0112904564
Format: PDF
Size: 63,6 МБ
Language: English
Pages: 101
This book records the recovery vehicles, trailers and tank transporters operated by the British Army since mechanical transport was first adopted, and not only lists and describes the vehicles themselves but sets their developments, acquisition and use against the contemporary background in both war and peace. The book shows that not until World War II was it fully appreciated that the retrieval and repair of damaged equipment from the battlefield could make a significant impact on the costs and logistics of war. The book is illustrated with some previously unpublished photographs - including some experimental vehicles never portrayed before - and should appeal not only to all military transport enthusiasts and modellers but also to those interested in the civil development of heavy vehicles.