Scream of Eagles: The Creation of Top Gun and the U.S. Air Victory in Vietnam 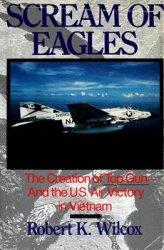 The first true-life account of the creation of the Top Gun school during the Vietnam War era. Wilcox's gripping narrative describes how a handful of Navy fighter pilots established a special school called Top Gun at the Miramar Air Station in California in 1968 and virtually revolutionized air combat training. Top Gun doctrine was fully validated when Randy Cunningham and his radar interceptor officer, William Driscoll, became the first American aces of the Vietnam war. By the time of the U.S. pullout in 1973, Top Gun's kill ratio was 12 to 1, compared with the Air Force's "dismal" 2 to 1. Wilcox ( The Shroud ) contends that Top Gun training forged the only clear-cut victory America won during the 1965-1973 war. The book features breathtaking accounts of aerial duels--Wilcox is very good at describing the three-dimensional world of dogfighting. His account of the school's ad hoc origins and the effort to develop ways of meeting the MiG challenge in Vietnam is equally exciting. Screaming Eagles ranks with the best of the books about air combat.