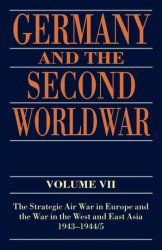 By the spring of 1943, after the defeat at Stalingrad, the writing was on the wall. But while commanders close to the troops on Germany's various fronts were beginning to read it, those at the top were resolutely looking the other way. This seventh volume in the magisterial 10-volume series from the Militärgeschichtliches Forschungsamt [Research Institute for Military History] shows both Germany and her Japanese ally on the defensive, from 1943 into early 1945. It looks in depth at the strategic air war over the Reich and the mounting toll taken in the Battles of the Ruhr, Hamburg, and Berlin, and at the "Battle of the Radar Sets" so central to them all. The collapse of the Luftwaffe in its retaliatory role led to hopes being pinned on the revolutionary V-weapons, whose dramatic but ultimately fruitless achievements are chronicled.