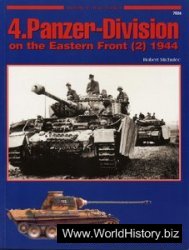 Author: Robert Michulec
Concord 7026 - Panzer Division On The Eastern Front (2) 1944
Concord Publications
ISBN: 962361649X
1999
Format: PDF
Size: 23,8 МБ
Language: English
Pages: 72
The year 1944 started out ceremoniously. On January 31, 1944, the commander of the Division, Gen.Lt. Dietrich von Saucken was awarded the Swords to his Knight's Cross, the only such decoration to be won by any member of 4.Panzer-Division. The award was presented to him for his long service and leadership during the Division's successful operations in the summer and early autumn of 1943. In the latter months of 1943, the Division had not seen any significant action and very few decorations were awarded. During that time, the Division had been very weak, lacking replacements in men and equipment, including armored vehicles and transports.