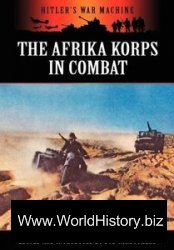 Author: Bob Carruthers
The Afrika Korps in Combat (Hitler's War Machine)
Pen and Sword
ISBN: 1781581207
2012
Format: EPUB
Size: 1,6 МБ
Language: English
Pages: 130
Courage which goes against military expediency is stupidity, or, if it is insisted upon by a commander, irresponsibility." Erwin Rommel Compiled, edited and introduced by Emmy Award winning author Bob Carruthers, this fascinating compilation of war-time Allied intelligence reports presents a unique insight into the tactical and operational aspects of the Afrika Korps as viewed by their enemies. The reputation of the Afrika Korps is now synonymous with that of its first commander Erwin Rommel, and in the process the Desert War has become renowned as the 'war without hate', which arose from the shared experience as both sides were forced to battle a hostile and unforgiving environment. These absorbing primary sources provide a compelling picture through the eyes of the participants of the Desert War from the time when the events were still unfolding. This book is part of the 'Hitler's War Machine' series, a new military history range compiled and edited by Emmy Award winning author and historian Bob Carruthers. The series draws on primary sources and contemporary documents to provide a new insight into the true nature of Hitler's Wehrmacht. The series consultant is David Mcwhinnie creator of the award winning PBS series 'Battlefield.