Fort Pulaski and the Defense of Savannah 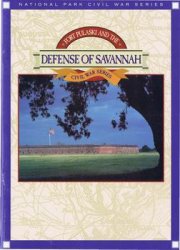 Fort Pulaski was part of the defense of Savannah, the most strategic point along the Georgia coast. The expanding international cotton industry made Savannah a major international port in the pre-Civil War South. Three railroads converged on the city. Shipbuilding, marine industries, and railroad shops were the primary military industries.
Forts such as Pulaski had two missions—to prevent the passage of ships and to resist attack. Stopping ships required the proper number and caliber of guns. Ground defense required inaccessibility and distance from bombarding artillery. Fort Pulaski was ready for both missions. Before the Civil War, the chief engineer of the United States Army had said, "You might as well bombard the Rocky Mountains as Fort Pulaski. . . . The fort could not be reduced in a month's firing with any number of guns of manageable caliber."