Bad Days in History: A Gleefully Grim Chronicle of Misfortune, Mayhem, and Misery for Every Day of the Year 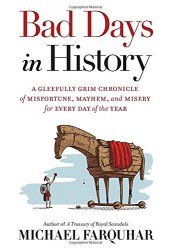 National Geographic and author Michael Farquhar uncover an instance of bad luck, epic misfortune, and unadulterated mayhem tied to every day of the year. From Caligula's blood-soaked end to hotelier Steve Wynn's unfortunate run-in with a priceless Picasso, these 365 tales of misery include lost fortunes (like the would-be Apple investor who pulled out in 1977 and missed out on a $30 billion-dollar windfall), romance gone wrong (like the 16th-century Shah who experimented with an early form of Viagra with empire-changing results), and truly bizarre moments (like the Great Molasses Flood of 1919).
Think you’re having a bad day? Trust us, it gets worse.