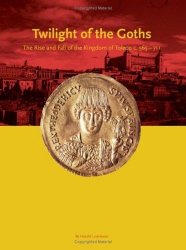 Toledo, former capital of Spain until 1560, is now one of the most monumental of Spanish cities. In
Roman times, it was originally a modest tribal township, which was eventually elevated to a national
capital by the Visigoths (one of two main branches of the Goths, who along with their cousins, the
Ostrogoths in South Russia, were considered barbarians across Europe).


The history of the Visigoth's
victory over Rome and the foundation of their own Western empire is an epic story: as dramatic as their
subsequent overthrow in a single battle by the Islamic expansion in 710-711. Their rise owes much to
their service as allies, and later legionaries, of the Roman army. Over time, they gradually shed their
tribal attributes and became themselves 'Romanized'. The Goths' sudden collapse arose, similarly to the
Romans, from their failure to resolve the problem of succession. Their legacy is unseen: they left no
written history of themselves, and their story has to be pieced together from other accounts, however
this book attempts to trace their evolutionary passage from a Germanic tribe into conquerors.