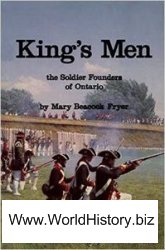 Author: Mary Beacock Fryer
King's Men The Soldier Founders of Ontario
Dundurn
ISBN: 0919670512
1980
Format: PDF
Size: 23,7 МБ
Language: English
Pages: 400
King’s Men is the story of the Loyalist regiments who became the soldier founders of the Province of Ontario, the Loyal Colonials who joined the Provincial Corps of the British Army, Canadian Command, during the American revolution.
Mythology on the United Empire Loyalists who founded two Canadian provinces is ingrained. We often envisage loyal families marching out of the victorious United States at the close of the American Revolution. But these myths lead us to overlook a fascinating period in the lives of one group of Loyalists – the soldiers who became Ontario’s founders.
By the time the Treaty of Separation was signed in 1783, four full strength corps were serving in Canada. These were the Royal Highland Emigrants (placed on the regular establishment in 1778, as the 84th Foot), the King’s Royal Regiment of New York, Butler’s Rangers, and the Loyal Rangers. A fifth corps, the King’s rangers amounted to three full companies.
A detailed study on what these Provincials achieved is long overdue. King’s Men fills a gap in tracing the lives of these United Empire Loyalists who first fought under British command, and spent a difficult period as displaced persons in Canada (people whose only desire was to return to their homes in Britain’s older colonies) till the time when they accepted Canada as a new homeland.