Hitler's Bureaucrats The Nazi Security Police and the Banality of Evil 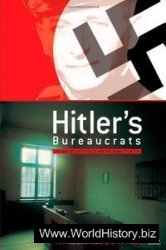 Author: Yaacov Lozowick
Hitler's Bureaucrats The Nazi Security Police and the Banality of Evil
Continnuum-3PL
2005
ISBN: 0826479189
Format: PDF
Size: 15,7 МБ
Language: English
Pages: 320
For many, the name Adolf Eichmann is synonymous with the Nazi murder of six million Jews. Alongside Adolf Hitler and Heinrich Himmler, he is probably the most infamous of the Nazi murderers; unlike them, the aura linked to his name is that of the ultimate evil that may lurk in each and every one of us. This understanding can be attributed above all to Hannah Arendt, and her seminal book, Eichmann in Jersualem: A Report on the Banality of Evil, in which she suggested that Eighcmann and many bureaucrats like him never actually realized what they were doing:they were thoughtless rather than consciously evil. By taking this position, Arendt rejected the biblical story of Genesis, which sets the ability to distinguish between right and wrong at the very core of beign human. Instead, she implied that Eichmann represented a potential face of the future. This book claims that she was wrong. It describes the facts as they appear in the documentation created by Eichmann and his colleagues, and suggest that they fully understood what they were doing. The primary motivating force for their actions was a well-developed acceptance of th tenents of Nazi ideology, of which antisemitism was a central component. As far as one is able to determine, after the war not a single one of them ever expressed regret for their actions against the Jews, unless it was regret for having to pay the consequences. These were no run-of-the-mill bureaucrats who merely 'followed orders'.