A Military History of the Ottomans, From Osman to Ataturk 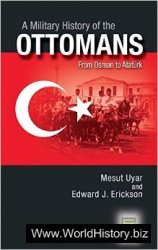 Author: Mesut Uyar, Edward J Erickson
A Military History of the Ottomans, From Osman to Ataturk
Praeger
ISBN: 0275988767
2009
Format: PDF
Size: 3,4 МБ
Language: English
Pages: 379
The Ottoman Army had a significant effect on the history of the modern world and particularly on that of the Middle East and Europe. This study, written by a Turkish and an American scholar, is a revision and corrective to western accounts because it is based on Turkish interpretations, rather than European interpretations, of events. As the world's dominant military machine from 1300 to the mid-1700's, the Ottoman Army led the way in military institutions, organizational structures, technology, and tactics. In decline thereafter, it nevertheless remained a considerable force to be counted in the balance of power through 1918. From its nomadic origins, it underwent revolutions in military affairs as well as several transformations which enabled it to compete on favorable terms with the best of armies of the day. This study tracks the growth of the Ottoman Army as a professional institution from the perspective of the Ottomans themselves, by using previously untapped Ottoman source materials. Additionally, the impact of important commanders and the role of politics, as these affected the army, are examined. The study concludes with the Ottoman legacy and its effect on the Republic and modern Turkish Army.