The Rise of the Nazis (Understanding World History (Reference Point)) 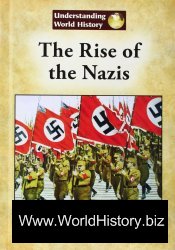 At the end of World War I Germany was in chaos: unemployment, poverty and homelessness afflicted the country that had been defeated in the war. A desperate people were willing to follow any leader who promised to make Germany into an economic and military power. The Germans chose to follow Nazi leader Adolf Hitler, whose vision of German exceptionalism and world domination sparked a second and even more devastating world war.