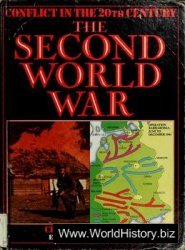 The Second World War is often described as a "total war." Although it began as a relatively restricted conflict between the Anglo-French allies and Germany over the political future of Poland in early September 1939, it gradually spread, drawing in country after country. In April 1940, Denmark and Norway were invaded by the Germans; a month later it was the turn of Belgium, the Netherlands, Luxemburg and France. Italy joined in on Germany's side in June and, after attacking British forces in Egypt and East Africa, took part in the invasion of Yugoslavia and Greece...