Red-tail Angels: The Story of the Tuskegee Airmen of World War II 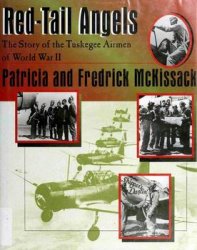 Established in 1941, the pilot-training program at Tuskegee, Ala., had been designed as an "experiment," without full military support to ensure its success and with many officers predicting utter failure. Despite segregated facilities at the base, hostile reactions from the locals and other demoralizing conditions, the aviators trained at Tuskegee went on to fly hundreds of missions over North Africa and Europe. They were known as Red Tails for the designs on their planes; they earned the nickname Red-Tail Angels with their reputation for staying with the bomber planes they escorted. The pilots of the 332nd division, the McKissacks point out, never lost a bomber-a record unmatched by any other group in the Army Air Force. As the McKissacks outline the history of the squadron, they also tell the larger story of racial tension and bigotry in the U.S. Numerous photos, from both military archives and individual fliers, depict the pilots and their deeds.