ecret Science: A Century of Poison Warfare and Human Experiments 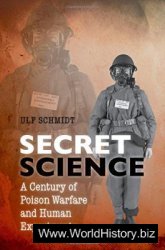 There have long been allegations that many servicemen had been duped into taking part in trials with toxic agents at top-secret Allied research facilities. In Britain, a whole army of over 21,000 soldiers had participated in secret experiments between 1939 and 1989. Some remembered them as innocuous, others as harmful, and in isolated cases deadly. Ulf Schmidt offers a comprehensive history of chemical and biological weapons research by former Allied powers, providing a significant new interpretation of the cover-up of the death of a British serviceman in 1953. Employing new archival material and including many interviews with those involved, he charts the history of this "secret science" from its development during the First World War to the ongoing attempts by the international community to ban these weapons.