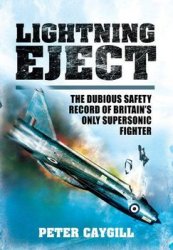 The English Electric Lightning entered RAF squadron service in 1960 and continued flying in the interceptor role until 1988. It had a stunning world-beating performance with a top speed in excess of Mach 2 and a climb rate that would take it to 40,000 feet in a little over 3 minutes. The aircraft's safety record, however, left much to be desired. During a period in the early 1970s the attrition rate was the loss of a Lightning every month. There was a six per cent chance of a pilot experiencing an engine fire and a one in four chance that he would not survive.