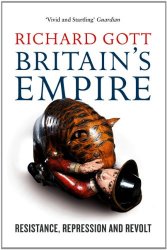 Magisterial history of the foundation of the British empire, and the forgotten story of resistance to its formation. This revelatory new history punctures the still widely held belief that the British Empire was an enlightened and civilizing enterprise of great benefit to its subject peoples. Instead, Britain’s Empire reveals a history of systemic repression and almost continual violence, showing how British rule was imposed as a military operation and maintained as a military dictatorship. For colonized peoples, the experience was a horrific one—of slavery, famine, battle and extermination.