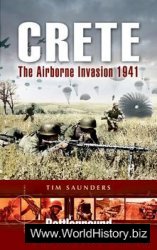 The invasion was launched to round off Hitler's Balkan Campaign against Crete in May 1941. The Island was important to Britain's control of the Eastern Mediterranean and Churchill was determined that the Island would be held. The British garrison was largely made up of New Zealand and Australian troops who had been evacuated from Greece, with little more that what they stood up in. On the other hand the German Commander, Kurt Student, had overwhelming air superiority, which negated the Allied naval superiority. But the Germans had almost fatally underestimated the number of Allied troops.