Nazi Germany and the Arab world 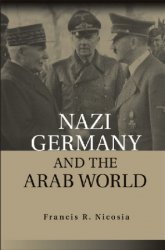 This book considers the evolving strategic interests and foreign policy intent of the Third Reich toward the Arabic-speaking world, from Hitler's assumption of power in January 1933 to 1944, a year following the final Axis defeat in and expulsion from North Africa in May 1943. It does so within the context of two central, interconnected issues in the larger history of National Socialism and the Third Reich, namely Nazi geopolitical interests and ambitions and the regime's racial ideology and policy. This book defines the relatively limited geopolitical interests of Nazi Germany in the Middle East and North Africa within the context of its relationships with the other European great powers and its policies with regard to the Arabs and Jews who lived in those areas