Europe since 1945: An encyclopedia 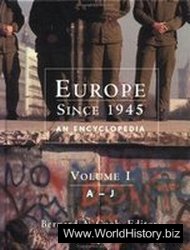 The collapse of Communism in Eastern Europe in 1989 seemed a logical conclusion to a historical epoch launched by World War II (1914–18), but more specifically to the Europe that was produced by the changes of World War II (1939–45). The latter conflict completed the exhaustion of France and Great Britain that was so evident in World War I. Germany in 1945 was prostrate and under military occupation. The Soviet Union, though it had experienced horrific devastation during the war, moved into the vacuum in the east created by the defeat of Nazi Germany. The last half of the twentieth century saw the rise of the Cold War as the United States assumed a leadership role in the dual effort to contain the Soviet Union and to assist in the reconstruction of Western Europe.