At War, at Sea: Sailors and Naval Combat in the Twentieth Century 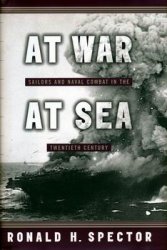 At War at Sea is a fascinating account of the most important naval conflicts of the twentieth century. Beginning with a gripping narrative of one of the most decisive battles in history - the 1905 Battle of Tsushima between the Japanese and the Russians - and ending with the sophisticated missile engagements off the Falklands and in the Persian Gulf, naval historian Ronald Spector explores every facet of naval warfare." "Here are the real stories of combat at sea told from the point of view of the sailors who experienced it. How did it feel to be the target of a 15-inch shell at the Battle of Jutland or to experience a depth-charge attack in a submarine in the Battle of the Atlantic? What was it like to be under attack by Stuka dive bombers off Crete or kamikazes off Okinawa during World War II? What is the difference between being a sailor on a German U-boat or on today's nuclear submarines? Using more than a hundred diaries, memoirs, letters, and interviews as well as the official record, Spector takes an in-depth look at fighting sailors - in peacetime and in time of war - that is unparalleled both in scope and emotional intensity." "Researched and fascinating in its detail, Spector also explains how the politics and social backdrop inside and outside of the navies of Japan, Russia, Britain, Germany, and the United States affected both the sailors and the navies themselves during the last century. The result is a monumental history of the men, the ships, and the battles fought on the high seas.