Embers of War: The Fall of an Empire and the Making of America's Vietnam 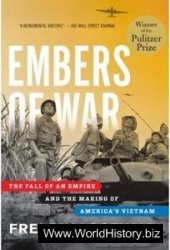 Author: Fredrik Logevall
Embers of War: The Fall of an Empire and the Making of America's Vietnam
Random House
ISBN: 0375504427
2012
Format: EPUB
Size: 10,8 МБ
Language: English
Pages: 864
The struggle for Vietnam occupies a central place in the history of the twentieth century. Fought over a period of three decades, the conflict drew in all the world’s powers and saw two of them—first France, then the United States—attempt to subdue the revolutionary Vietnamese forces. For France, the defeat marked the effective end of her colonial empire, while for America the war left a gaping wound in the body politic that remains open to this day.
How did it happen? Tapping into newly accessible diplomatic archives in several nations and making full use of the published literature, distinguished scholar Fredrik Logevall traces the path that led two Western nations to lose their way in Vietnam. Embers of War opens in 1919 at the Versailles Peace Conference, where a young Ho Chi Minh tries to deliver a petition for Vietnamese independence to President Woodrow Wilson. It concludes in 1959, with a Viet Cong ambush on an outpost outside Saigon and the deaths of two American officers whose names would be the first to be carved into the black granite of the Vietnam Veterans Memorial.