The Pendulum of War: The Fight for Upper Canada, January-June 1813 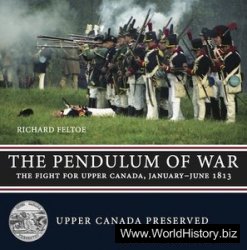 In his second of six books in the series Upper Canada Preserved — War of 1812, author Richard Feltoe continues a battlefield chronicle that combines the best of modern historical research with extensive quotes from original official documents and personal letters, bringing to life the crucial first six months of the 1813 American campaign to invade and conquer Upper Canada. The Pendulum of War documents the course of more than seven major battles and over a dozen minor engagements that were fought on the St. Lawrence, Niagara, and Detroit frontiers to control Upper Canada during this period. It also reveals some of the behind-the-scenes personal stories and conflicts of the personalities involved. Throughout the work, historical images are counterpointed with modern pictures taken from the same perspective to give a true then-and-now effect. Strategic maps trace the course of the campaign, while never-before-published battlefield maps reveal the shifting formations of troops across a geographically accurate terrain.