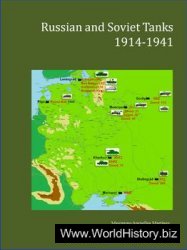 About the evolution of the Soviet offensive doctrine during World War II. Where did this doctrine and armored formations that takes practice arise?. Why was the USSR as a nation which in 1940 developed a tank as advanced as the T-34?. 100 pages trying to answer these and other questions with a description of the principal armored vehicles and the formations in which were integrated from its beginnings in the Russian Empire until June 22, 1941.