Squadron/Signal Publications 1207: B-52 G/H Stratofortress in Action - Aircraft No. 207 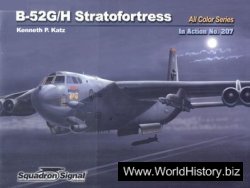 Squadron/Signal Publications 1207: B-52 G/H Stratofortress in Action - Aircraft No. 207
Author: Kenneth P. Katz
Squadron/Signal Publications
ISBN: 0897475410
2007
Pages: 62
Format: PDF
Size: 13.7МБ
Language: English
More than any other weapon system, the legendary Boeing B-52 Stratofortress is the embodiment of American military power in the popular imagination. The B-52 was workhorse of the Strategic Air Command in its nuclear deterrent role, the most important mission during the Cold War. Perhaps the most impressive aspect of the B-52 has been its longevity. First flown in 1952 and entering operational service with the US Air Force in 1955; Boeing delivered the last new B-52 in 1962. More than 4 decades later, the B-52 remains in front line service, most recently serving in combat over Afghanistan and Iraq. Even more amazingly, current plans are for the B-52 to remain in service until 2040! 119 photographs, 113 of which are in color, plus line drawings and five color profiles.