The Foundations of Modern Terrorism: State, Society and the Dynamics of Political Violence 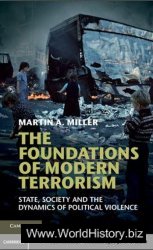 Why is it that terrorism has become such a central factor in our lives despite all the efforts to eradicate it? Ranging from early modern Europe to the contemporary Middle East, Martin Miller reveals the foundations of modern terrorism. He argues that the French Revolution was a watershed moment as it was then that ordinary citizens first claimed the right to govern. The traditional notion of state legitimacy was forever altered and terrorism became part of a violent contest over control of state power between officials in government and insurgents in society. In the nineteenth and twentieth centuries terrorism evolved into a way of seeing the world and a way of life for both insurgents and state security forces with the two sides drawn ever closer in their behaviour and tactics. This is a groundbreaking history of terrorism which, for the first time, integrates the violence of governments and insurgencies.