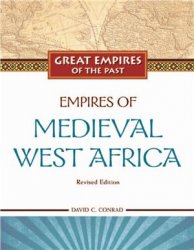 Author: David C. Conrad
Empires of Medieval West Africa: Ghana, Mali, and Songhay (Great Empires of the Past)
Chelsea House Publications
2009
Language: English
Pages: 152
Format: PDF
Size: 15,53 МБ
Beginning about 1200 CE, the Mali, Songhay, and Ghana empires spread their sequential influence across the western horn of Africa, making advances in trade, language, culture, and economy. Influenced heavily by Islam in their later periods, these empires flourished and grew under a series of powerful leaders, including one, Mansa Musa, whose skills were celebrated in European capitals. "Empires of Medieval West Africa, Revised Edition" discusses the vital role salt and other natural resources played in the development of the empires, the rich and diverse cultures, and the influence of the growing Islamic Empire on every day life. Included are some transcriptions of the oral tradition that is, in many cases, the only record of the deeds and achievements of these people. Connections to life today include the continuing impact of Islam and tribal groups in today's Africa and the influence of the medieval traditions on modern music and cuisine.