World War One: A Short History 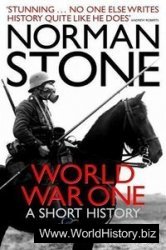 Author: Norman Stone
World War One: A Short History
Penguin
2009
ISBN: 0141031565
Format: EPUB
Size: 3,2 МБ
Language: English
Pages: 240
Stone is as unconventional as he is brilliant, and this provocative interpretation of the Great War combines impressive command of the literature with a telling eye for relevant facts and a sensitive ear for telling epigrams. Stone presents a Europe that in 1914 bestrode the world like the proverbial colossus. Four years later, the continent faced a spectrum of disasters: shattered economies, shattered societies, shattered lives and shattered illusions.
The First World War was the overwhelming disaster from which everything else in the twentieth century stemmed. Fourteen million combatants died, four empires were destroyed, and even the victors’ empires were fatally damaged. World War I took humanity from the nineteenth century forcibly into the twentieth—and then, at Versailles, cast Europe on the path to World War II as well. In World War One, Norman Stone, one of the world’s greatest historians, has achieved the almost impossible task of writing a terse and witty short history of the war. A captivating, brisk narrative, World War One is Stone’s masterful effort to make sense of one of the twentieth century’s pivotal conflicts.