The Industrial Past: Buildings, Landscapes, Artifacts, and Documents

Since industrial archaeology began as a campaign to preserve, or at least to record, selected sites and structures deriving from the industrial past, more attention has been paid to the study of standing buildings than is true for most periods of archaeology. Industrial buildings are the visible symbol of the processes of production in both space and time, and the analysis of these buildings requires the use of the archaeological concepts of function, context, and typology. The industrial archaeologist has to be able to recognize the buildings characteristic of particular industries in order to determine their function by examining form and topographical context. Typological sequences of structures such as lime, pottery, or brick kilns can help establish relative dates although in many cases the technology used was that deemed appropriate for the purpose: for example, primitive temporary clamps for brick manufacture were built alongside the construction sites of railway tunnels or canal locks in the nineteenth century for speed and convenience even though far more sophisticated methods of production were available. The final stage of the analysis involves the study of the building in its cultural context, attempting to understand its symbolism in terms of power structures and employer-worker relationships within the industry with which it was associated. The volunteer nature of early industrial archaeology meant that most of the fieldwork was site specific, consisting of studies of individual sites and buildings which were published in both regional and local journals. Widespread industrial change toward the end of the twentieth century, however, led to many types of industrial buildings and structures becoming redundant and in danger of demolition without record at the same time. Regional and national surveys were only possible with public funding and an excellent example of such work in the UK are the three volumes on textile mills published in the 1990s by RCHME on West Yorkshire, Greater Manchester, and Cheshire, together with extensive recording in the Derwent valley of Derbyshire and yet unpublished work on southwest England (Figure 5). Valuable though these were, little attention was paid to any form of spatial analysis to try to determine how the workforce functioned within them. In this respect, the work of the architectural historian Robert Markus in his 1993 Buildings and Power has been influential in encouraging research students to attempt such analysis, for example, the work of Ian Mellor on various Yorkshire textile mills. In the USA, Mary Beaudry and Stephen Mzrowski have gone further in their multidisciplinary study of the textile town of Lowell in Massachusetts, demonstrating how the form of the settlement expressed the corporate image sought by the entrepreneurs who built the mills, with the female workforce safely ensconced in boarding houses (Figure 6). Patterns of settlement are as important in this period as in earlier periods of history in indicating economic and social organization, and 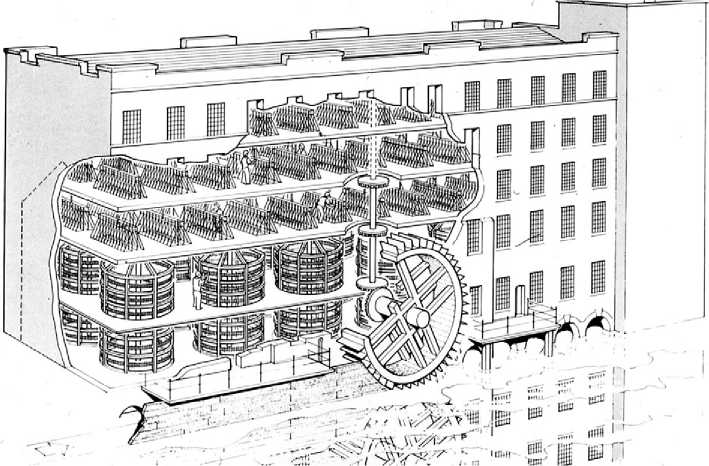 Figure 5 A reconstruction drawing of Lombe’s pioneering silk mill at Derby as it may have appeared in 1721. The workforce operated in a space dictated by the circular and transverse silk throwing and twisting machines, which were themselves dependent on the power of the great waterwheel. (RCHME, © Crown Copyright) 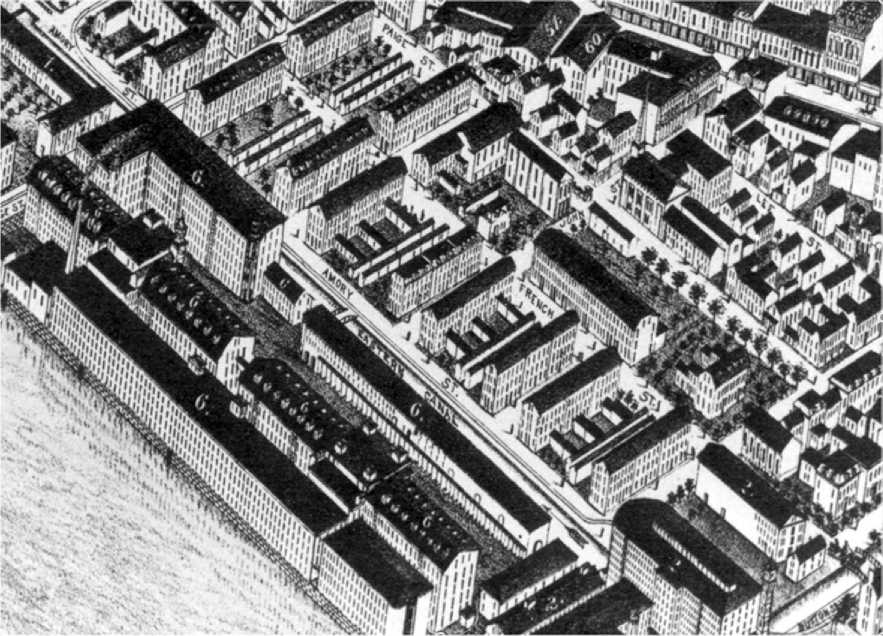 Figure 6 Abird’seye viewof partof Lowell, Massachusetts, by Bailey and Hazah 1876. The Boot Mills are shown between the river and the Eastern Canal, while at right angles to these are the eight rows of boarding houses in which female mill workers were housed.

Much more work is being carried out on domestic housing, one of the earliest studies being Lucy Caf-fyn’s Workers’ Housing of West Yorkshire (1986). It has also been increasingly recognized that industrial activities persisted on a domestic basis long after the introduction of the factory, and Paul Barnwell, Marilyn Palmer, and Malcolm Airs in 2004 brought together summaries of work being carried out in The Vernacular Workshop, while Marilyn Palmer and Peter Neaverson continued this in their 2005 The Textile Industry of South-west England: a Social Archaeology.

The first use of the term industrial archaeology in print in 1955 coincided with the publication of W. G. Hoskins’ seminal Making of the English Landscape which popularized ‘landscape history’. Hoskins resented the intrusion of large-scale industrialization into the self-sufficient village communities in which he was interested but he did appreciate the potential of industrial archaeology to recreate a particular stage in the development of past society when industry was part of the rural economy. Landscape to both the historian and the archaeologist is the physical manifestation of changes wrought by man in both space and time. Buildings in their relationship to one another and to their topographical setting are part of landscape, and one of the major reasons for studying industrial landscapes is to transform a collection of individual structures into a coherent whole which has meaning in both technological and cultural terms. Technologically, the interrelationship of buildings and features in the landscape is usually determined by sequences of industrial production and the adaptation of these to local environmental conditions. Culturally, these interrelationships can reveal systems of industrial organization and social relationships, particularly those between the employer and his workforce. The task of the industrial archaeologist is to analyze the industrial landscape in terms of both the spatial and the sequential relationships of structures and features in order to illuminate the process of industrialization.

Increasing professional activity has begun to reverse the site-specific tendency of early industrial archaeology, and most fieldwork and research programs now reach beyond the structures of prime technological significance to consider their wider context, examining sources of raw materials, provision of power, transport systems, associated industry and accommodation, as in Barry Trinder’s The Making of the Industrial Landscape and Marilyn Palmer and Peter Neaverson’s Industry in the Landscape, 1700-1900. Studies of industrial landscapes normally take one of two forms: limited surveys of features associated with a particular site or structure or extensive surveys of whole areas. An outstanding example of the former in the UK is the work carried out by Wayne Cocroft, formerly of RCHME, on the extensive and complex site of the Royal Gunpowder Factory at Waltham Abbey in Essex, published in 2000 as Dangerous Energy. This exemplified the problems of determining both spatial and sequential relationships in the landscape, since it included a multiplicity of different buildings and earthworks and had a chronological depth from the mid-seventeenth to the end of the twentieth century. On a broader scale, Judith Alfrey and Kate Clark’s Nuffield-funded survey of the internationally important landscape of the Ironbridge Gorge in Shropshire in the late 1980s sought to reveal change over time by means of detailed plot surveys making use of both historic maps and the contemporary landscape. Mark Bowden and Ian Goodall of English Heritage undertook an important survey of the Furness district of Cumbria to identify the relationships in the landscape between the surviving iron furnaces, the associated charcoal pitsteads and the sledways and tracks used for transporting the fuel. Considerable archaeological evidence also remained of the related woodland industries, including remnants of the huts occupied by the charcoal-burners and other itinerant woodland workers. Studies such as these are the essence of industrial archaeology, revealing both the spatial links in the landscape and the social context of technological development.

To most historical archaeologists, artifacts comprise the main body of evidence from which information about the lifestyles of past societies is derived. Variations in the type and distribution of artifacts indicate material change and prompt investigation into its causes. Industrial archaeologists, however, have chronicled the development of the means of production in terms of changing structures but have paid less attention to the new types of artifacts produced as a result, although David Barker has worked on both the kilns and their products in the potteries of Stoke-on-Trent. This is an obvious area for cooperation between industrial and historical archaeology, since only by bringing the means of production and the products together can changes in material culture be identified and the reasons for change understood. Justine Bayley and Jim Williams of English Heritage have shown in a paper on ‘Archaeological science and industrial archaeology - manufacturing, landscape, and social context’ published in Understanding the Workplace: A Research Framework for Industrial Archaeology how scientific techniques can illuminate 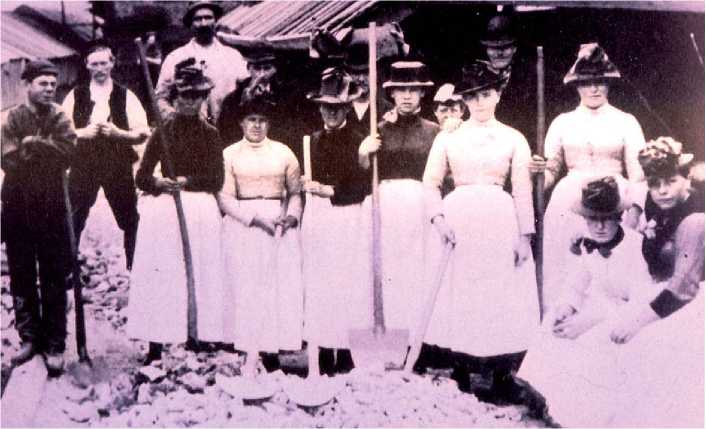 Figure 7 The strong-armed women or balmaidens employed to break up ore at tin and copper mining sites of Cornwall. The role of women in mining is often neglected but they played a major role in preparation and dressing work on the surface while their menfolk extracted ore underground.

Both historical and industrial archaeology make routine use of textual evidence. The industrial period is rich in such sources but, since the majority of the workforce was illiterate until at least the end of the nineteenth century, they emanate from the employer rather than the employed. However, with the increasing tendency to give due weight to the human as well as the technological aspects of industrial archaeology, oral histories, photographs, and local collections of memorabilia all have their place in trying to bring the material record back to life (Figure 7). The definition of industrial archaeology used by The International Committee for the Industrial Heritage (TICCIH) rightly stresses that the discipline makes use of all methods of investigation most suitable for to increase the understanding of the industrial past and present.